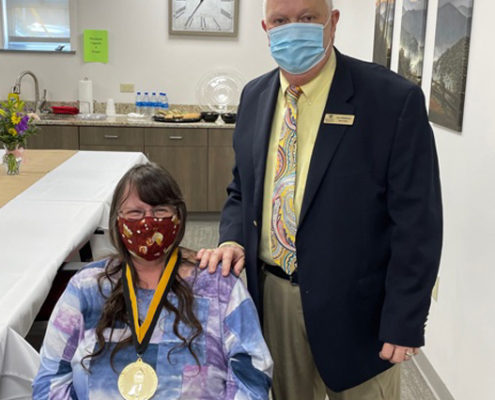 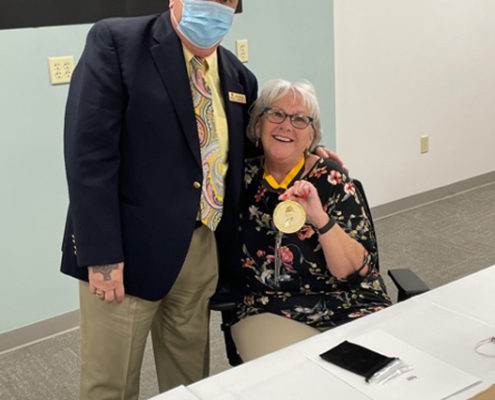 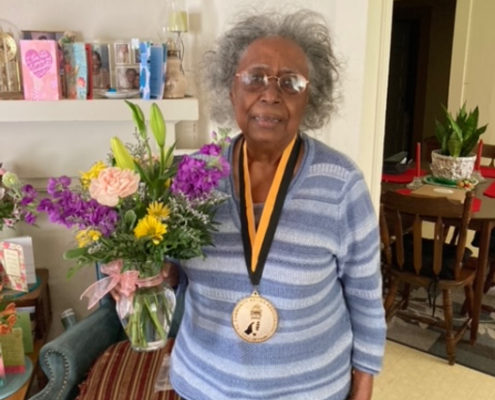 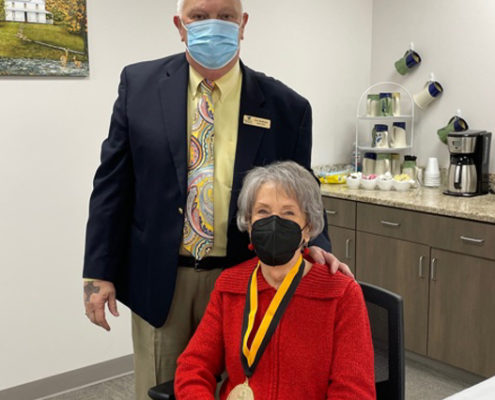 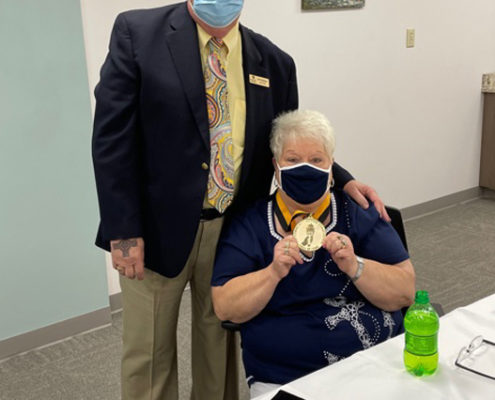 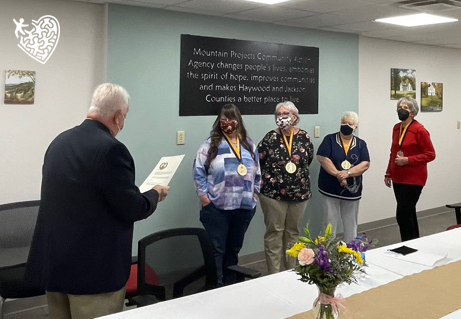 Five members of the extended Mountain Projects family were honored Thursday, May 13, with induction into the North Carolina Community Action Association Hall of Fame.

Honorees include Brenda Oliver-Holt, Board Member; Becky Davis, Section 8 Department; Georgia Forney, volunteer and Board Member; Janice Cook, Finance Department and Vivian Bumgarner, Housing Rehabilitation. They join an esteemed list of champions from across the state, and we’re so proud that they’re part of our team and our community. Their bios are below.

In 1984 Vivian Bumgarner was working for the Executive Director of Mountain Projects doing yard work at his home. One day he asked if she could read a measuring tape, and soon Vivian was hired in the Weatherization department to cut plexiglass for insulating windows. She also kept the wood stove burning which then heated the office building, and one memorable chore was cleaning out a storage area in which a large hornet’s nest had formed. She rose to the challenge, gained a reputation for hard work, and eventually became head of the department. Vivian said she enjoys her job because she enjoys helping people live in a better environment, and because she encounters something different each day. One story she shares was of a lady with a house so infested with termites it had to be demolished and replaced. Another is of a house in which her team installed the first bathroom ever for two elderly ladies. When an inspector came to see the progress, one of the ladies was very excited to show him how the toilet flushed – she’d never seen one before. These types of stories have made Vivian’s work life rewarding, and she now manages the Housing Rehab department, operating under a combination of 11 grants. Vivian will not walk away from a person in need. Last year she and a coworker raised enough funds to replace a mobile home for a disabled gentleman that was in a critical housing situation. She often takes clients food and has even been known to take lonely clients to her family holiday meals. The lives she has touched during her 37 years number in the thousands.

Janice Cook came to Mountain Projects in 1983 as part of the CITA work experience program, performing data entry. She was soon hired in the Finance Department, where she typed every check manually and kept program ledgers. Finance was the first department to become computerized, and Cook helped develop those processes. She has enjoyed her job and loves working with numbers. Janice feels the members of the Finance department are the backbone of the agency and the unseen heroes behind the scenes. Sometimes, during her 38 years at Mountain Projects, there would be so many auditors coming they would need to be scheduled, but the team has worked hard to assure clean audits and books. Cook shares a story of having to measure the amount of steel used in building the Public Transit building and accounting for each piece of wood used that was produced in America, and has been observed searching records for hours to assure every dollar balances. Several grants have been awarded due to the reputation of integrity of the agency thanks to the Finance department, and that translates into making life better for thousands of residents in Haywood and Jackson Counties. Much has changed since the arrival of the first computer. The agency has grown to a budget of $15 million and Janice continues to arrive in early morning hours to carefully manage finances.

Becky Davis began working for Mountain Projects Community Action Agency in 1984. She worked in the Weatherization Department for three months and then moved to the Section 8 Housing Department, where she has remained since. Davis says she’s always loved working with clients, never dreaded work, and has always been excited to pull together resources for clients struggling to make ends meet. Becky shares the story of one client who was unable to read or write. The lady, who grew pumpkins, was so thankful for Becky’s help that for years afterwards she brought Becky a new pumpkin with each crop. After 36 years, Becky still arrives promptly at 5:30 A.M. and cheerfully greets each client.

Georgia Forney began her journey with Mountain Projects in 1989 as a Foster Grandparent, helping to shape the young minds in child care. Georgia has volunteered more than 20,000 hours, and after serving Foster Grandparents for 20 years, she joined the Mountain Projects Board of Directors, where she still provides positive input at the young age of 91. She faithfully attends all Board meetings, remains involved in the community, and has been affectionately named the “Cheerleader of Mountain Projects”. Ms. Forney, who has the rare gift of a contagious positive attitude, has an abounding love for all those she knows.

Brenda Oliver-Holt has been a pillar in the community for many years. She worked in neonatal and surgical nursing at Harris Regional Hospital for 38 years and served as Director of Surgical Services. Mrs. Holt served as a board member of the Town of Sylva for 11 years and as Mayor of Sylva for 17 years. She has been instrumental in expansion of industry, providing resources for local jobs and preserving natural resources in the area. She has served on many boards including the NC League of Municipalities, the National League of Cities and local boards such as Mountain Projects Community Action Agency. Brenda said she has stayed on Mountain Projects’ board for 29 years because she believes in its mission and has been privileged to watch the agency grow to serve members in the community who were underserved. The current Executive Director, Patsy Davis, gives credit to Ms. Holt for her support.  “She has been my mentor, cheerleader, supporter and rock. Without her, I would not have made it my first couple of years”. With the example of her father’s military service, and her own passion, Brenda Oliver-Holt  has served in the community many years to make a real difference in the lives of people in need.